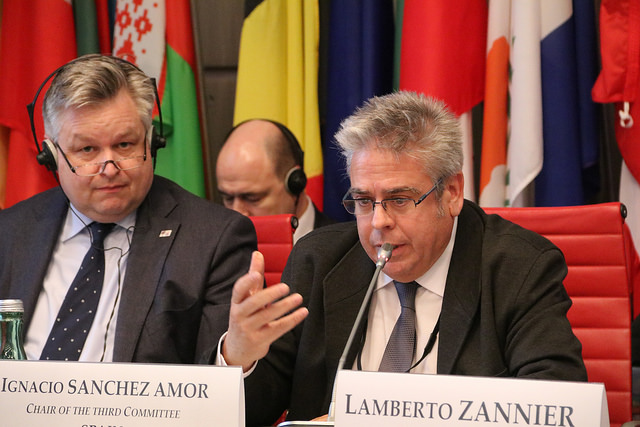 Some of the primary issues discussed in the Third Committee include women’s rights, the protection of children, combating human trafficking, and eliminating discrimination based on race and religion.

Gender has been an increasingly important topic for the committee. As an example, its 2014 session included the review of the Report of the Committee on the Elimination of Discrimination against Women, four reports from the Office of the Secretary-General and a letter from the Permanent Representative of Japan summarizing the World Assembly for Women. By the end of the session, the Third Committee recommended five draft resolutions to the General Assembly for passage covering topics such as efforts to eliminate all forms of violence against women and girls, trafficking of women and girls, and the elimination of female genital mutilation.  Draft Resolution 69/150 references the Convention on the Rights of the Child and a special session of the General Assembly titled “Women 2000: gender equality, development and peace for the twenty-first century”.  Among its many operative clauses is one that calls upon States to focus on the development of comprehensive prevention strategies, including educational campaigns, awareness-raising as well as  formal, non-formal and informal education.

Another major focus of the Third Committee is promoting the rights of children. For example, the 2015 session included five reports from the office of the Secretary-General on topics ranging from violence against children to children in armed conflict. The Special Rapporteur also submitted a report on the sale of children, child prostitution and child pornography. By the end of the session, the committee recommended two draft resolutions to the General Assembly for passage. The Committee also offered instruction on how “the Implementation of the Convention on the Rights of the Child and the Optional Protocols thereto”which discussed ways for states to eliminate child discrimination, discusses adoption and alternative care, the economic and social well-being of children It also encourages states to take steps to prohibit child labour, and lists actionable steps to eliminate violence against children.

The Third Committee uses the considerable research resources of the United Nations to make informed decisions to advance humanitarian issues. On average at the end of a session the GA Third Committee will have considered around 50 draft resolutions.

The formal meetings of the Third Committee are webcast live on UN Web TV in the six official languages of the United Nations.