Meet the Economic Commission for Africa 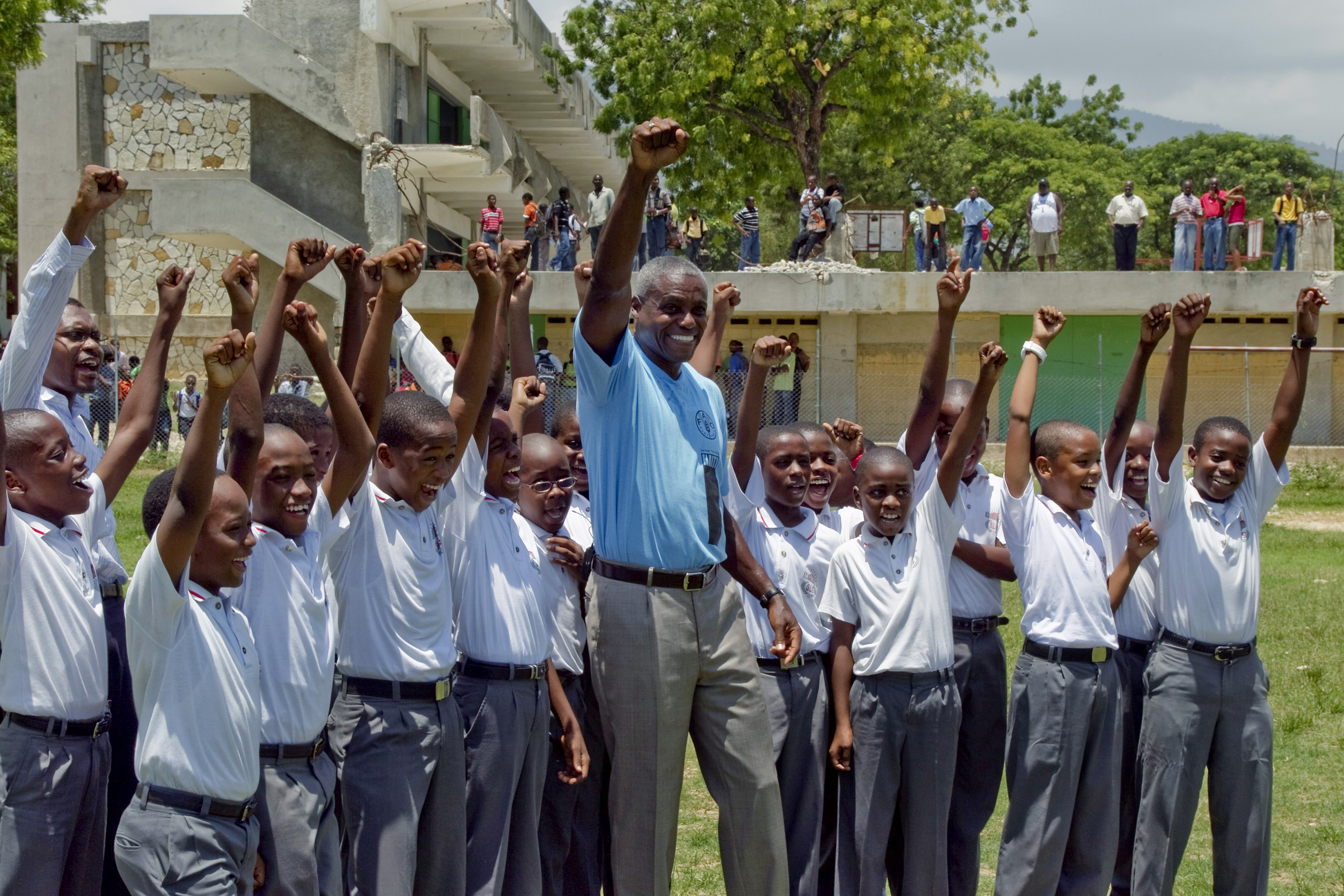 American athlete and Olympic gold medalist Carl Lewis cheers with students during a visit to their school. Lewis spent two days in Haiti is his capacity as Goodwill Ambassador of FAO (Food and Agriculture Organization). Lewis is advocating the current initiative Fruit Trees for Haiti, as well as supporting the International Year of the Forest and The Race Against Hunger. Photo Logan Abassi UN/MINUSTAH
Posted on May 31, 2019 by Teresa Whetstone  in Turtle Bay

In 1958, the Economic and Social Council (ECOSOC) established five regional commissions to seek regionally-based solutions for  economic integration, development stimulation and improvement of participation in the international community. These commissions were created on the recommendation of the United Nations General Assembly Second Committee during its twelfth session. The Economic Commissions for Africa (ECA) works specifically with the 54 member states on the African continent.

The main areas of work within the ECA include, but are not limited to:

The ECA issues regular progress reports on topics such as Regional Cooperation and Integration, Gender and Social Development, and Sustainable Development. The body functions under an Executive Secretary, currently Vera Songwe of Cameroon, and two deputy secretaries. Its mission is primarily to encourage growth and market competitiveness of a more unified African economy through knowledge generation and delivery.

Knowledge generation comes primarily in the form of statistical analysis of trends. Over the years, the ECA reports have focused on topics such as the energy crisis, governance, and infrastructure. More recent energy reports center on providing access to adequate energy for development, as energy is seen as the core of progress. Governance reports focus on ethical management and allocation of natural resources by bolstering corruption-free institutions. Knowledge delivery involves using annual retreats to issue reports to, and foster relationships among, permanent representatives to ECA. Additionally, the ECA provides a forum for open discussion and debate on policy such as the Agenda 2063 for pan-African unity and peace, and the 2030 Agenda for worldwide sustainable development to eradicate poverty.

The 52nd Session of the ECA began Wednesday, 20 March 2019 in Marrakech, Morocco. The focus is “fiscal policy, trade, and the private sector in the digital era: a strategy for Africa.” A key topic was fiscal policy, which plays  an essential role in the realization of an African Continental Free Trade Area (AfCFTA). Since 2018, negotiations for implementation of Phase II have been ongoing to include investment, intellectual property rights, and competition policies. Establishing AfCFTA has been a major long-term goal of the ECA and other smaller African organizations, that still lacks public and private investment.

The ECA continues to be a valuable resource inside and outside the United Nations. Outside of the UN, the ECA works closely with the African Union (AU), established in 2001. The AU has affirmed the need for the AfCFTA in order to advance the interests of Africans in the global market for goods and services. Cooperation between the AU and the ECA provides an avenue for increased participation in, and adherence to, joint-force-led actions. By removing barriers to free and fair trade, the AfCFTA would begin to encourage intra-Africa trade.

However, there is growing concern about the lack of advancement in African infrastructure and how that might inhibit sustainable economic growth throughout the continent. More developed countries, such as Nigeria and South Africa, have been hesitant to join the AfCFTA due to possible foreign interference in their economy.  There is hope for passage since South Africa made the decision to join in June of 2018. As of February 2019, 52 out of 55 African countries have signed the AfCFTA.