LGBTQ+ Rights as Human Rights: Reflecting on the United Nations During Pride Month 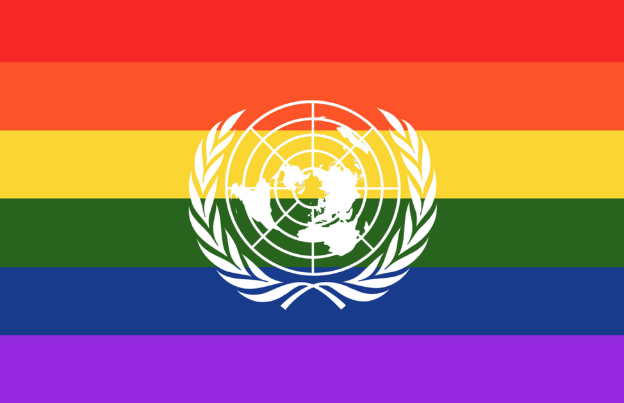 Pride flag with United Nations crest.
Posted on June 28, 2019 by Erin Meek  in Just for Fun

Pride can mean many things; perhaps a high regard for yourself and those around you, or maybe a sense of patriotism for your country of residence or birth. However, for the world’s lesbian, gay, bisexual, transgender, and other queer-identified citizens (referred to hereafter as LGBTQ+), “pride” is a celebration of identity and the advances that have been made in the fight for equal protections and human rights for the LGBTQ+ community. Pride celebrations span the globe in the months of May and June- sometimes with millions of attendees (like the massive annual festival in San Paulo, Brazil), and sometimes with small gatherings held in secret (like in Uganda, where homosexuality is outlawed).

The Charter of the United Nations, ratified in 1945, encourages “respect for human rights and for fundamental freedoms for all without distinction”. The Charter is arguably the United Nations’ most significant guiding document, encouraging universal rights and protections to all the world’s citizens regardless of identity. Despite these fundamental principles, it is only in the past two decades that the United Nations has sought to address the rights of the world’s LGBTQ+ citizens. These changes in individual Member States and the United Nations as a whole have been earned through the blood, sweat, tears and lives of LGBTQ+ folks and advocates around the world, and this Pride month, we celebrate them and the fruits of their labor.

In 2012, the General Assembly passed A/RES/67/168, their first resolution condemning crimes motivated by the victims’ gender identity or sexual orientation; this language has been used in numerous resolutions since.

The Office of the United Nations High Commissioner for Human Rights (OHCHR) launched UN Free & Equal, the first arm of the United Nations devoted entirely to promoting equal rights and fair treatment of LGBTQ+ people in 2013. UN Free & Equal pays special attention to the needs and rights of intersex children, as they are often subjected to unnecessary surgery, causing physical and psychological pain and suffering.

In 2016, the United Nations appointed the first-ever Independent Expert on Sexual Orientation and Gender Identity, who has since sought to reduce violence and discrimination against LGBTQ+ peoples and has worked to improve their situation across the world.

For the past five years UN-GLOBE, an organization of the United Nations’ staff focused on LGBTQ+ advocacy within the United Nations itself, has been participating in Pride marches worldwide to show support for diversity, equality and inclusion for all.

The wheels of international advocacy and social change turn slowly, but it seems clear that despite pushback, the United Nations is determined to uphold the human rights of LGBTQ+ people and is encouraging Member States to do the same. In the past 20 years, more than 30 countries have decriminalized homosexuality, and more are joining the ranks each year. We can only hope that these numbers will continue to swell in the next 20 years, along with other human rights advances (i.e. health, economic, education, etc.) for LGBTQ+ people across the world.

There is much to feel proud about this June, but the United Nations and its international partners must maintain momentum and continue to advocate for the human rights and specialized needs of this especially vulnerable community. We must continue marching forward until Pride can be safely celebrated by everyone.